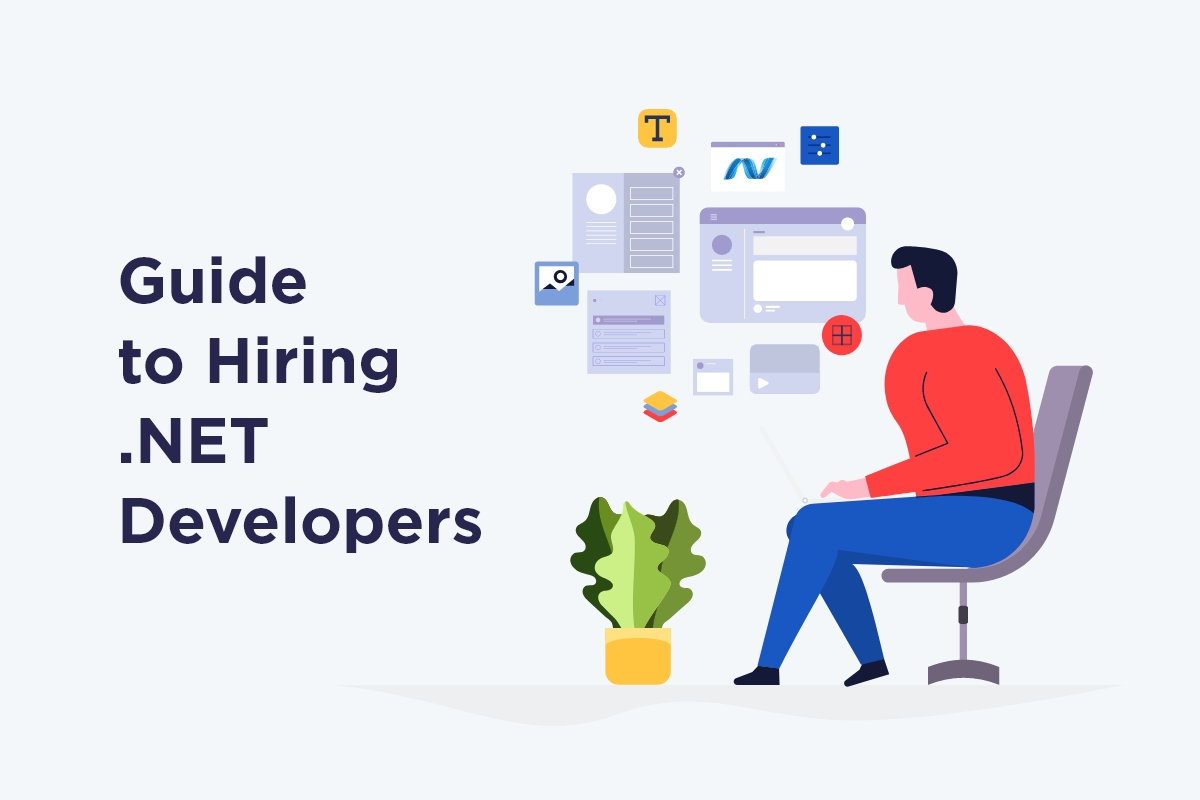 .NET development is one of the most popular web development platforms that doesn’t require any introduction. What makes it the first choice of developers these days? Well, .NET development has several features like ease of use, versatility, multi-functional features, etc. Such capabilities make .NET development an ideal solution for different kinds of software and web projects.

If you are looking to offer .NET development services, you will need a team of skilled and expert developers. The developers should be software and application development pro to help you achieve goals. We are shedding light on all the critical steps that you should keep in mind when building a team of .NET developers through our blog.

What is .NET Development?

.NET is a software development platform introduced by Microsoft. This platform gained significant momentum soon after its launch. This is because it offers a controlled environment to the programmers and helps in designing, developing, and deploying software. .NET code has a vast range of implementations. It can be leveraged to build almost all kinds of applications.

What is a .NET Developer?

As the name suggests, a .NET developer is a programmer who develops applications using the .NET programming language. They can develop numerous useful business logic for software applications and information systems. .NET backend developers are also responsible for maintaining seamless communication between the frontend of the software application and the database. They keep things organised in the best possible manner.

Why are .NET Developers in Such High Demand?

Furthermore, they can virtually develop any kind of application or software product, be it mobile apps, front end, back end, or any other web-based application. Businesses, therefore, hire .NET developers so that they can build robust applications.

Top Skills You Need to Look For

When hiring developers for the Development of applications using .NET, you need to make sure that they have ideal skills. We discuss some of them in detail for you to make an informed choice.

When it is about developing software products or web-based applications, there has to be know-how of technical skills. The developers should be adept with all required technical skills to develop applications with greater ease. They should have detailed knowledge of the technicalities involved in .NET development so that they can develop robust applications.

If you are looking for developers who have adequate knowledge in .NET development, databases are one of the most important skills. The developers should know about MySQL, Microsoft SQL Server, and Microsoft Cosmos DB databases. The developers work with multiple data sets, so they must be proficient in all different kinds of data sets. It enables them to develop highly optimized web pages.

The ability of .NET developers multiplies ten folds when they work with systems like the Entity Framework. With this framework, they will not have to worry about the relationships and objects and can work efficiently without it.

The best part about .NET is that the platform can be leveraged in amalgamation with a string of frameworks, other technologies, and platforms. It is an inclusive and flexible nature of .NET, and so it requires the developers to know multiple technologies. That said, they should be capable enough to be known as full-stack developers.

For instance, a .NET developer with core knowledge of databases and the .NET platform is a competitive developer in the development spectrum. Additionally, if they have skills in Javascript, CSS, HTML, jQuery, Bootstrap, etc. Such skills will make a developer much more worthy and dynamic.

ASP.NET MVC can be considered as an arm of the larger .NET platform. It enables the Development of high-performing and stunning web applications. If you require your project to have a robust client-facing front end in the form of a web app. Having said that, a .NET developer with knowledge of ASP.NET MVC serves the purpose well.

Furthermore, knowledge of ASP.NET is fundamental for a good .NET developer. While hiring .NET developers, check for their skills and make it a point that they have the desired skills.

Scrum is a crucial methodology of the agile framework. Besides all other desired skills, .NET developers should have one more critical skill, the ability to work in Scrum. It can be leveraged to develop specific functionalities of web apps and other services. Any software developer, including the .NET developers, should understand Scrum and knowledge of Agile Development concepts.

The MCSD/MCTS certification is in high demand for all .NET developers in the market. Developers proficient in such concepts are highly regarded by the development companies. Microsoft offers this certificate and is responsible for the development and maintenance. Also, they update it every two years.

.NET developers should be able to understand the specific needs of their clients well. They should know about creating engaging online apps that are interactive and innovative as well. Developers should learn client-side technologies such as HTML, CSS, Bootstrap, etc., to develop robust applications in sync with the SQL server.

It is critical for web developers to know code writing efficiently to develop all required functionalities in an app easily.

Testing of all web apps is critical, and unit testing is considered an essential skill in test-driven development procedures and Scrum. Applications are tested throughout so that all possible errors are caught only during the early development stages. Developers should be able to develop a tech stack of their choice and should be able to include all the technologies that they know.

Additionally, they should also know SpecFlow. This tool enables the automation of all tests included in the .NET development project.

Working on smaller projects with no significant complexities is easy. Developers can develop such applications manually. However, when it comes to developing complex functionalities in a web app, they should leverage tools. Such tools will help them leverage numerous development functions of the project, and it will free up a considerable amount of time for them to focus on the core tasks of web development.

A few examples of the tools used for automation include Jenkins, CCnet, Azure DevOps, etc., for .NET development.

They should research details about the industry where their client is running a business. They should have creative thinking skills along with a proactive approach.

We can conclude that .NET developers are in high demand these days. Like any object-oriented programming language, the .NET framework has diversified features that help developers build highly secure and innovative web apps. Hire a .NET development service to get your dream application built today.